Throughout its product line-up, Blueair offers some pretty good examples of how minimalism and simplicity can result in a highly functional unit.

For example, the Blueair Classic line has the Classic 605 as its top-of-the-line air purifier. The Blue family, on the other hand, has the Blue Pure 121 as its flagship model and the familyâ€™s pride and joy â€“ and for a good reason, too.Â

If youâ€™d like to learn about the features and benefits â€“ and any potential downsides â€“ be sure to read my Blueair Blue Pure 121 review!

The Blue Air Pure 121 is an air purifier devoid of flashy tech â€“ it doesnâ€™t have a sensor, a timer, or any automatic functions.Â

As youâ€™ll see in this Blueair Blue Pure 121 review, it still does what itâ€™s supposed to â€“ purify and improve indoor air quality!Â 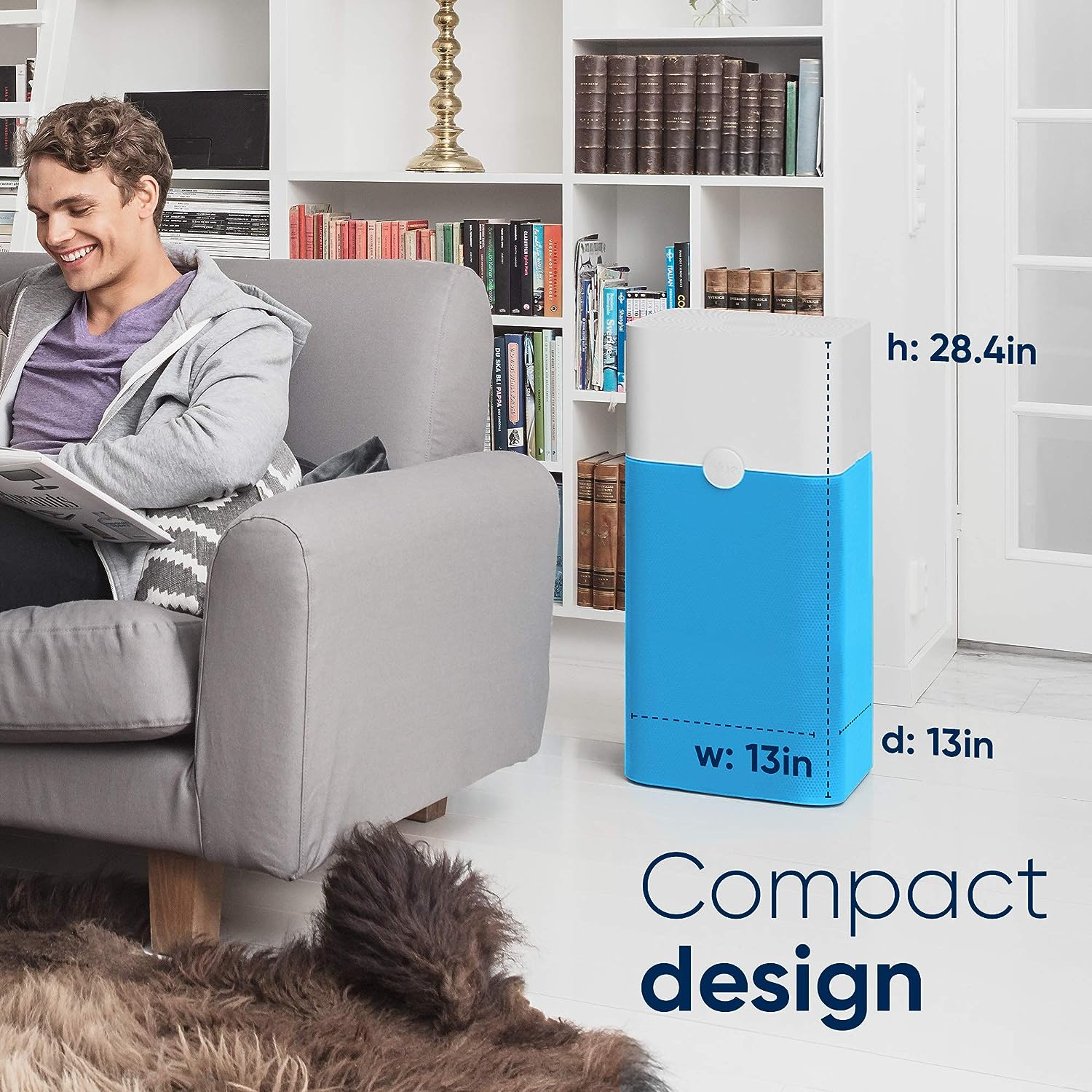 The Blue Pure 121 is, in essence, a super-sized version of its little sibling, the Blue Pure 211.Â

Now, when I say â€œsuper-sized,â€ I mostly refer to the purifierâ€™s height â€“ the Blue Pure does measure 28 x 13 x 13 inches. Still, at 18 pounds, itâ€™s reasonably lightweight; moving it around the house shouldnâ€™t be a problem.Â

Also, itâ€™s hard to ignore how attractive this air purifier is â€“ and Iâ€™m not talking about the sole construction, either:Â

The fabric pre-filter that wraps around the entire air purifier is available in five different colors. Youâ€™re free to switch things up and change the color to match the roomâ€™s dÃ©cor whenever you feel like it!Â

This pre-filter is also a pretty good indicator of the size of the air intake beneath it. The Blue Pure 121 features a 360-degree air intake for maximum efficiency â€“ no need to worry about placement â€“ with the outlet sitting on top.Â

The most significant benefit of this simple design is the unmatched ease of use:Â

There are no knobs or overly complicated control panels on this air purifier â€“ only a single button that does it all.Â 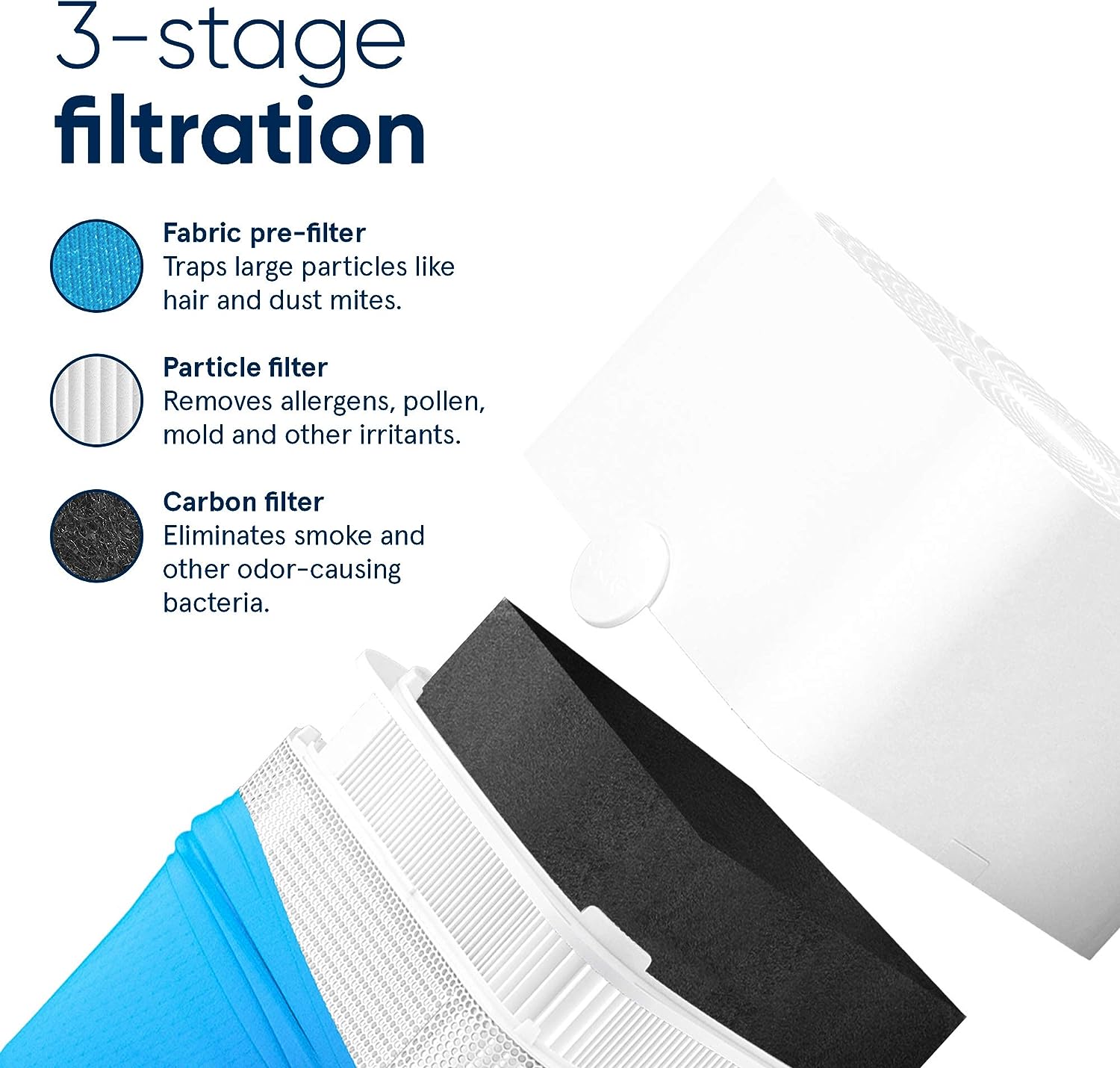 When I look at the Blue Air Pure 121, â€œsimpleâ€ and â€œstrongâ€ are the words that come to mind.Â

The powerful fan that sucks in the air through the 360-degree intake performs five air changes per hour, with impeccable CADR ratings of 400/400/400 cubic feet per minute for pollen, dust, and smoke.Â

And as if that werenâ€™t impressive enough, it also has a 620-square-foot coverage area!Â

Besides the actual fan â€“ which, by the way, has three available speed settings â€“ another critical aspect of its performance is, of course, the filtration system.Â

I already talked a bit about the washable fabric pre-filter, but adding to that are the polypropylene fiber particle filter â€“ an alternative to the true HEPA technology â€“ and the activated carbon filter.Â

Together, they capture up to 99 percent of airborne pollutants and eliminate smoke, household odors, and VOCs, as well.Â

Some of you may be worried about the noise levels, and while you canâ€™t expect an air purifier as powerful as this one to remain dead silent, the noise is kept at an acceptable level:Â

The lowest fan speed is almost whisper-quiet at 31 dB and doesnâ€™t go over 56 dB, even at the highest setting.

Decision Time: Is Blueair Blue Pure 121 the Best Air Purifier for You?

I started this Blue Air Pure 121 review by calling this air purifier the Blue familyâ€™s flagship model â€“ and I still stand by what I said.Â

Some of you may still be wondering about several high-tech features missing from its design, but let me ask you something:Â

Would you go for all those bells and whistles?Â

Or would you prefer one with the one-button operation, three-stage filtration, and industry-leading CADR and ACH ratings?Â

Thatâ€™s what the Blueair Blue Pure 121 brings to the table!

Related Posts  3 Undeniable Facts To Tell If An Air Purifier Is Working Well?
"Disclaimer: We are using Amazon affiliate Product Advertising API to fetch products from Amazon.com, include: price, content, image, logo, brand, feature of products, reviews which are trademarks of Amazon.com. So, when you buy through links on our site, we may earn an affiliate commission." Learn more