Would you like an air purifier that isnâ€™t overly flashy, but doesnâ€™t appear too dull or box-like, either?Â

The simple, clean lines â€“ with a pop of color â€“ of the Blueair Blue Pure 211+ could be right up your alley!Â

Itâ€™s incredibly user-friendly and stripped down to bare essentials â€“ but still has enough power to filter indoor air like the best of them.Â

However, as with the rest of the Blue line, you have to ask yourself:Â

How simple is too simple, though?Â

Find the answer â€“ along with tons of useful information â€“ in this Blue Air Pure 211+ review!Â

The Blue Pure 211+ is a member of the Blue family of high-performance air purifiers from an established Swedish brand â€“ the Blueair, known for superior performance, low-noise operation, and the stunning Scandinavian design, with simplicity at its core.Â

Read the rest of this Blue Air Pure 211+ review, and youâ€™ll see what I mean! 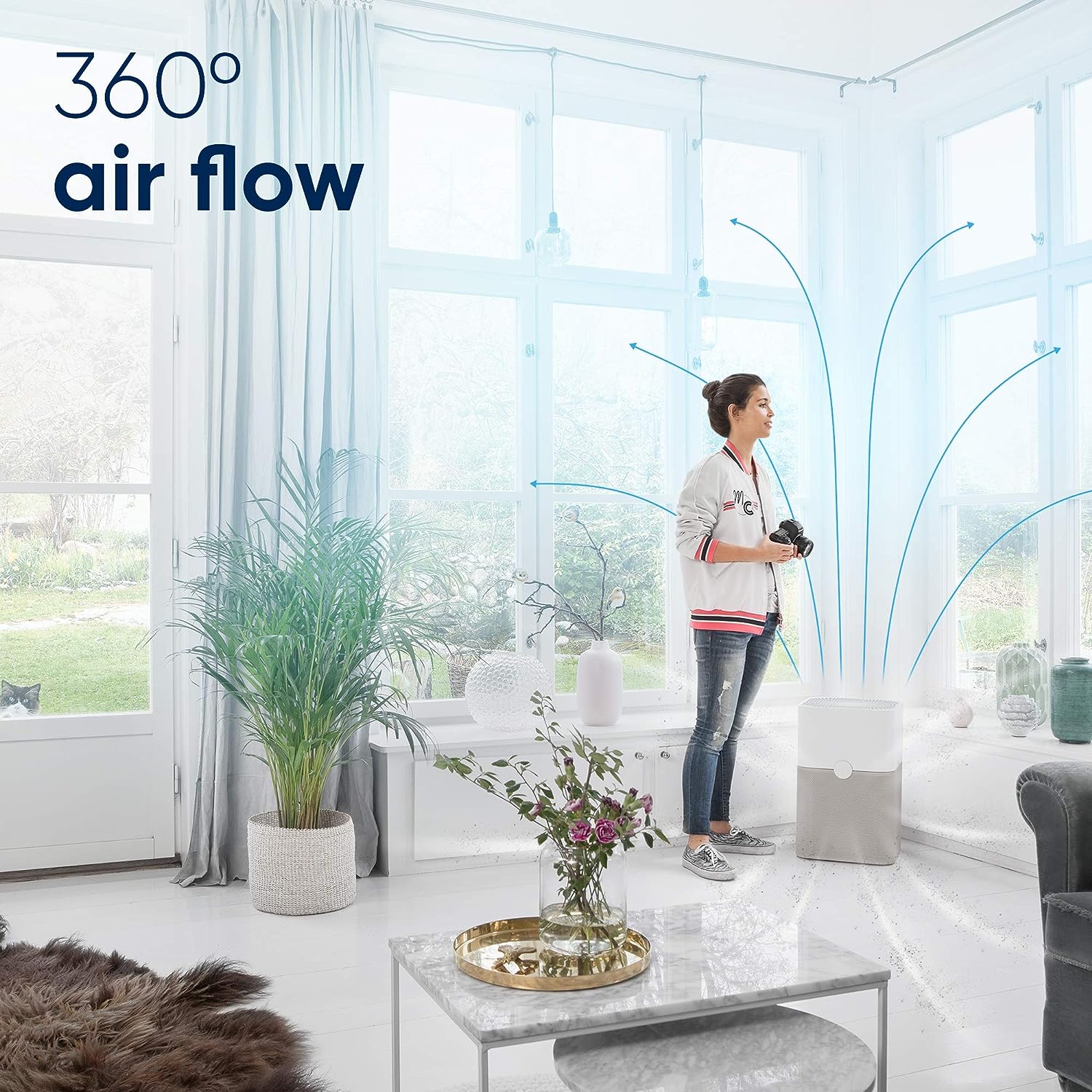 Itâ€™s hard not to love the design of the Blue Pure 211+ and the aesthetic appeal of its sleek, rounded square shape.Â

It looks a whole lot like the Blue Pure 121 â€“ but smaller.

Granted, at 20 inches tall â€“ and with a width of 13 inches â€“ it isnâ€™t tiny, but itâ€™s not a space-hogging air purifier, either. Plus, it weighs 13 pounds, so itâ€™s surprisingly portable, considering its coverage and performance levels.

The fabric that wraps around the air purifierâ€™s honeycomb-pattern housing serves as a cover and is available in several different colors. It allows you to customize the unitâ€™s appearance to match your home, and more importantly, plays a vital role in its performance:Â

The colored fabric serves as a washable pre-filter that traps larger particles before the air moves further into the large, 360-degree intake that sits beneath, drawing air from all sides.Â

And to those wondering where all the controls are â€“ there are none. The Blue Air Pure 211+ doesnâ€™t sport any additional features or advanced functions.Â

Instead, this air purifier adopts a one-button operation, keeping things as simple and straightforward as possible!Â 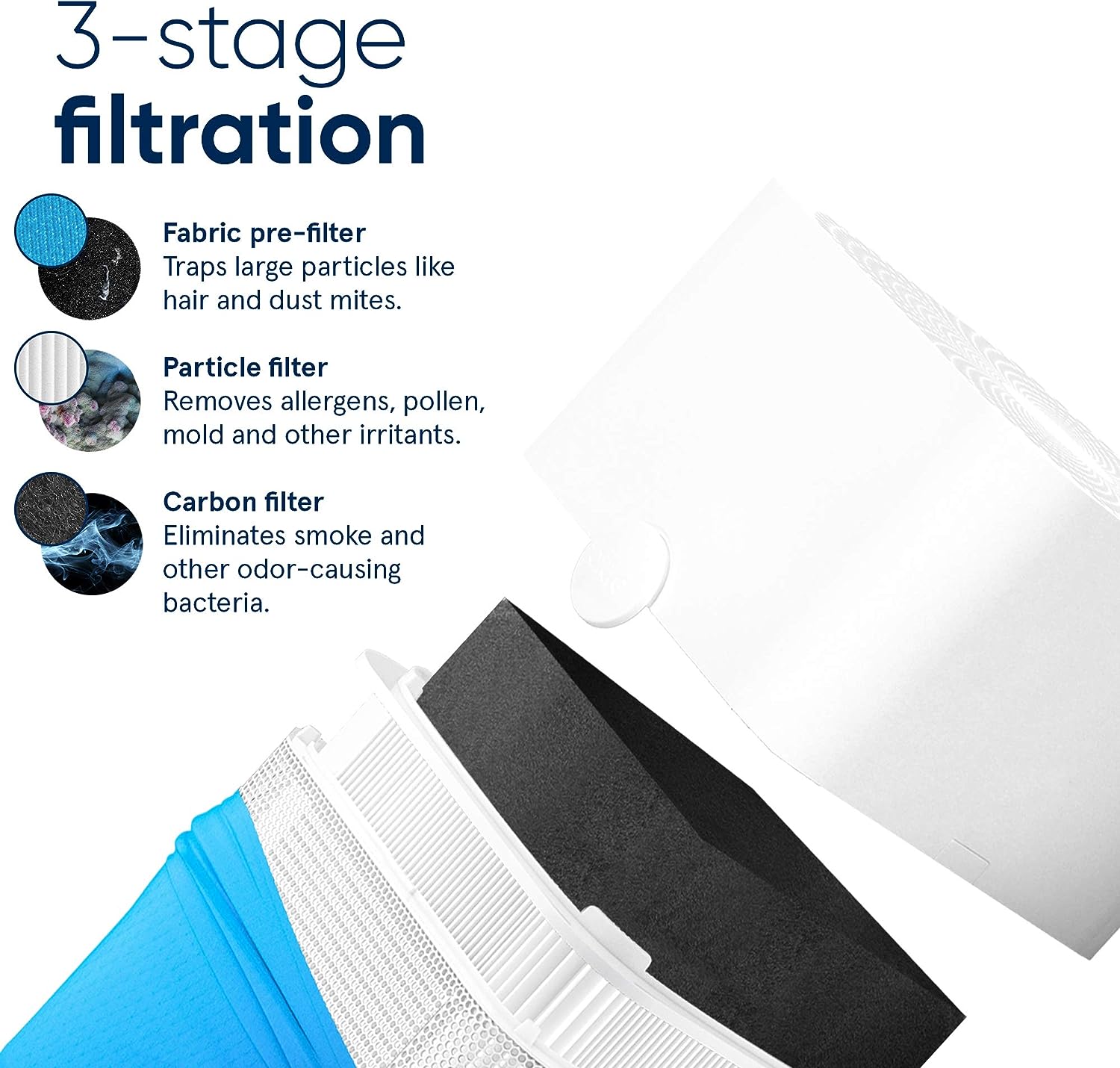 With a full-circle air intake, itâ€™s perfectly capable of sucking in pollutant-laden air from all corners of the room â€“ but this wouldnâ€™t mean much without the equally powerful three-stage filtration system:Â

Once the air passes the fabric pre-filter and the large particles are removed, it goes on to the proprietary polypropylene particle filter. Finally, the activated carbon filter takes care of smoke, odors, and VOCs.Â

Granted, it doesnâ€™t use a true HEPA filter, but the three filtration stages do eliminate up to 99 percent of common household pollutants, leaving virtually no particles or odors behind.Â

It also boasts three fan speed settings â€“ adjustable using the single button on the front of the air purifier â€“ and the ability to perform five air changes per hour in rooms of up to 540 square feet.Â

Even more so, the CADR ratings of this Blue Pure 211+ air purifier are pretty impressive, too, amounting to 350 cubic feet per minute for smoke, dust, as well as pollen.Â

The noise level depends on the actual fan speed. However, Iâ€™m glad to report that, with the range going from 32 to 56 dB, even at the highest setting, it still falls into the â€œwhite noiseâ€ category.Â

I think that itâ€™s pretty clear from this Blue Air Pure 211+ review that this air purifier covers all the bases, despite its compact frame and lack of bells and whistles:Â

Plus, changing its appearance is as easy as swapping the fabric pre-filter!Â

Donâ€™t settle for a second-rate air purifier; highly efficient and easy-to-use, the Blue Pure 211+ is a clear choice for any household!

Related Posts  Blueair Sense+ Review: Award-Winning Air Purifier for the Tech-Savvy
"Disclaimer: We are using Amazon affiliate Product Advertising API to fetch products from Amazon.com, include: price, content, image, logo, brand, feature of products, reviews which are trademarks of Amazon.com. So, when you buy through links on our site, we may earn an affiliate commission." Learn more