Clean lines, functionality, and minimalism are at the core of Blueairâ€™s design. So, itâ€™s no surprise that the Blueair Blue Pure 411 is stripped of the more advanced features, too.Â

Whatâ€™s surprising, though, is that it paves the way for the entry-level segment of the air purifier market:Â

Itâ€™s quite refreshing to come across an air purifier that can take more expensive units head-on, all while retaining a compact frame and a budget-friendly price tag.Â

If youâ€™d like to know more about this small but mighty air purifier, keep on reading for a detailed Blueair Blue Pure 411 review!

The simplistic, attractive design lines and the innovative filtration systems of Blueairâ€™s air purifiers are present in the Blue Pure 411 â€“ the smallest member of the Blue family. Yet, this particular model targets the entry-level market.Â

User-friendliness and affordability aside, though, what can you expect performance-wise?Â

Take a look at this Blueair Blue Pure 411 review and find out!Â 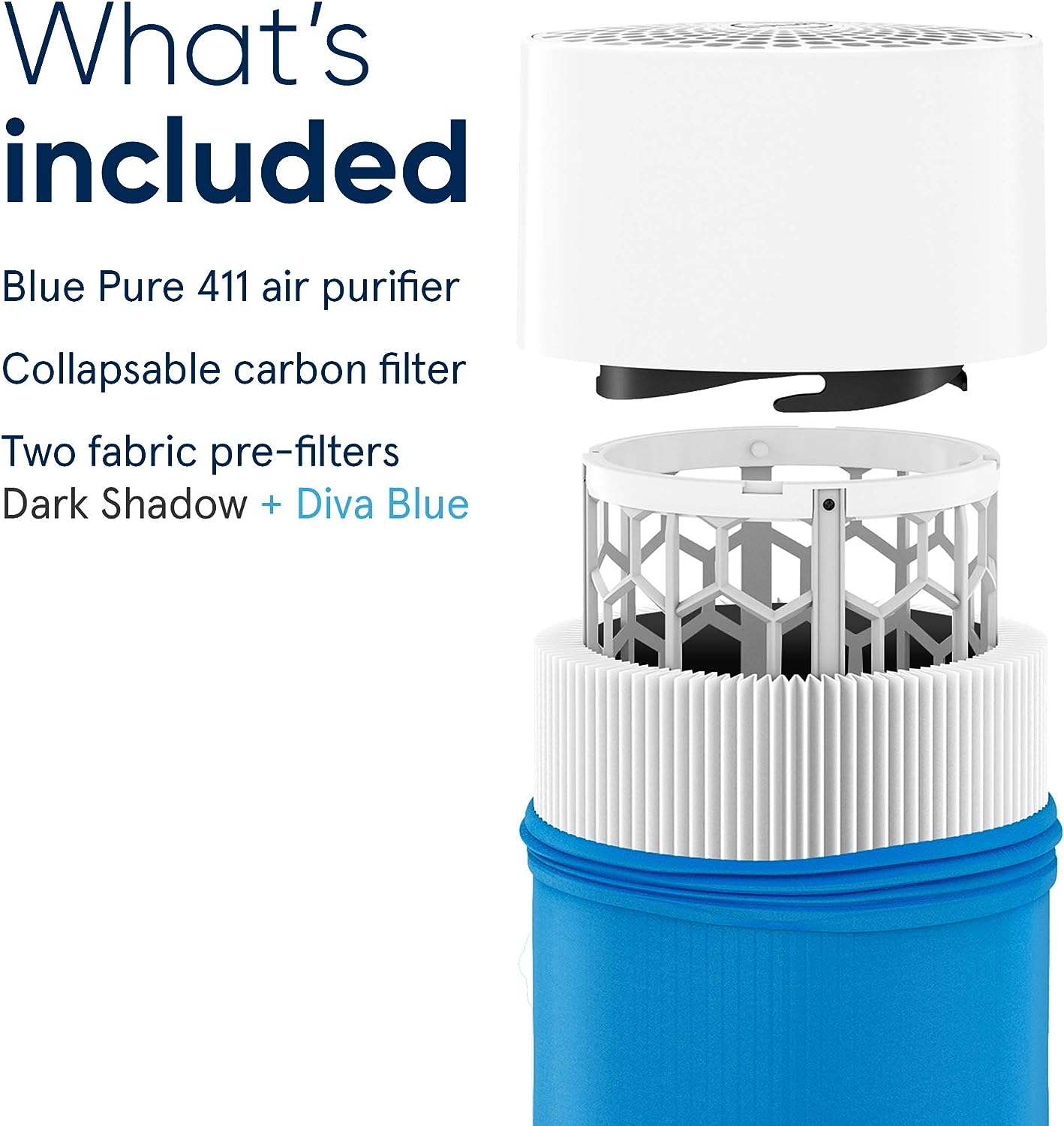 The compact frame and the cylindrical shape make the Blue Pure 411 an excellent choice for small and cozy spaces, as it doesnâ€™t take up a ton of floor space.Â

In a recognizable Blueair manner, it adopts a minimalist but attractive design with a strong focus on performance:Â

The 360-degree air intake that takes up the entire lower portion of the unit, with a fabric cover â€“ available in several different colors â€“ that adds to Blue Pure 411â€™s attractiveness and acts as a washable pre-filter.Â

This feature has proved to be so impressive that several other air purifier manufacturers decided to incorporate 360-degree intakes in their models, as well.Â

Also, itâ€™s easily one of the most lightweight air purifiers I came across recently, weighing as little as 3.35 pounds.Â

As for the controls, youâ€™ll find a single button at the top of the unit, right in the middle of the air outlet grille. The plug-and-play simplicity and overall ease-of-use are probably one of Blue Pure 411â€™s best features.Â

Blue Pure 411 is mostly a bedroom-centric air purifier; understandably, itâ€™s best suited for small rooms of up to 161 square feet.Â

The three-stage filtration system â€“ a combination of a fabric pre-filter, a polypropylene particle filter, and an activated carbon filter â€“ does an excellent job of removing 99 percent of large and fine particles, allergens, odors, VOCs, smoke, and other airborne irritants. 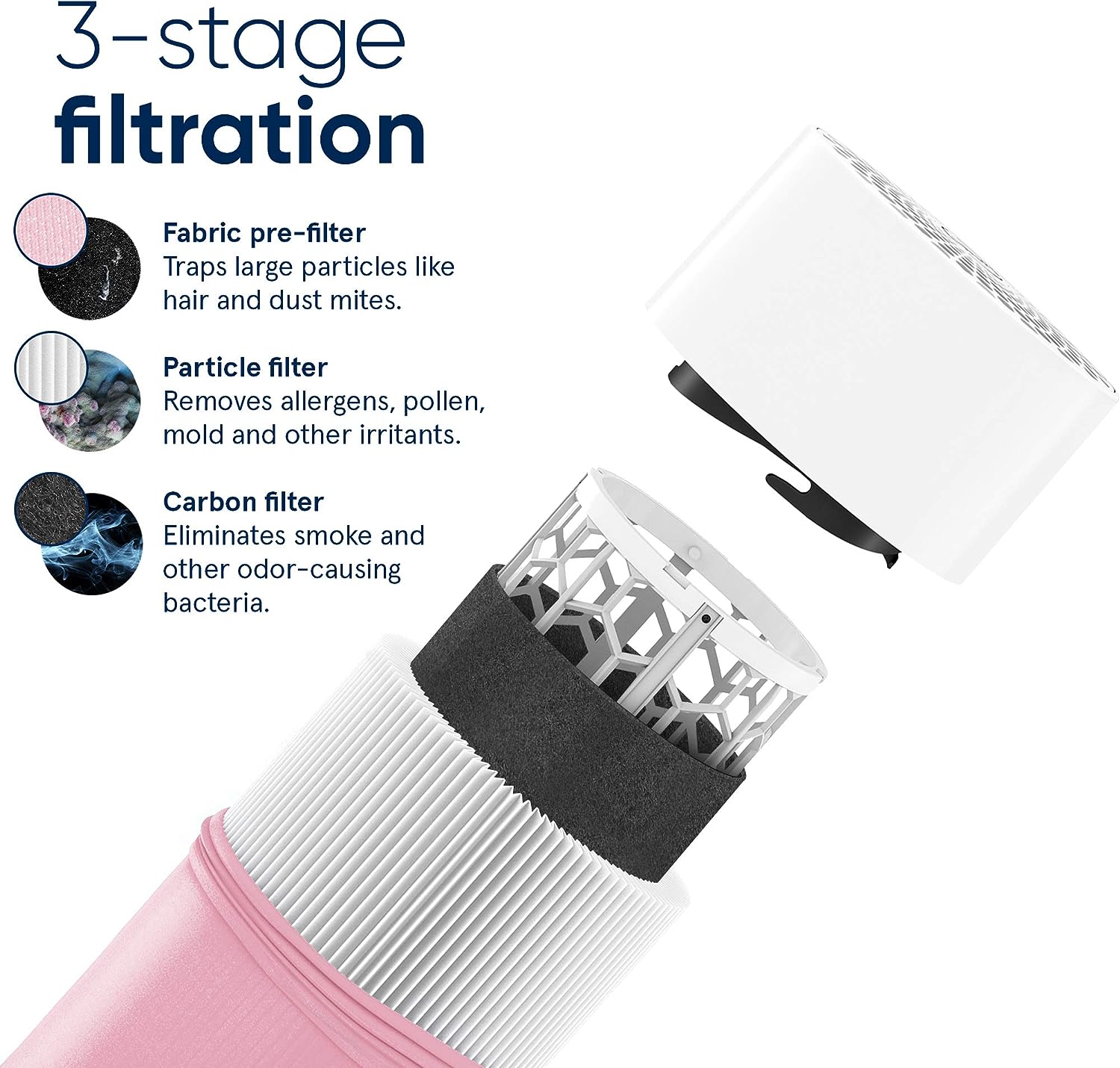 Furthermore, it performs five air changes per hour, with a CADR rating of 120 CFM for dust and pollen, and 105 CFM for smoke.Â

Keep in mind that Blue Pure 411 doesnâ€™t have a true HEPA filter.Â 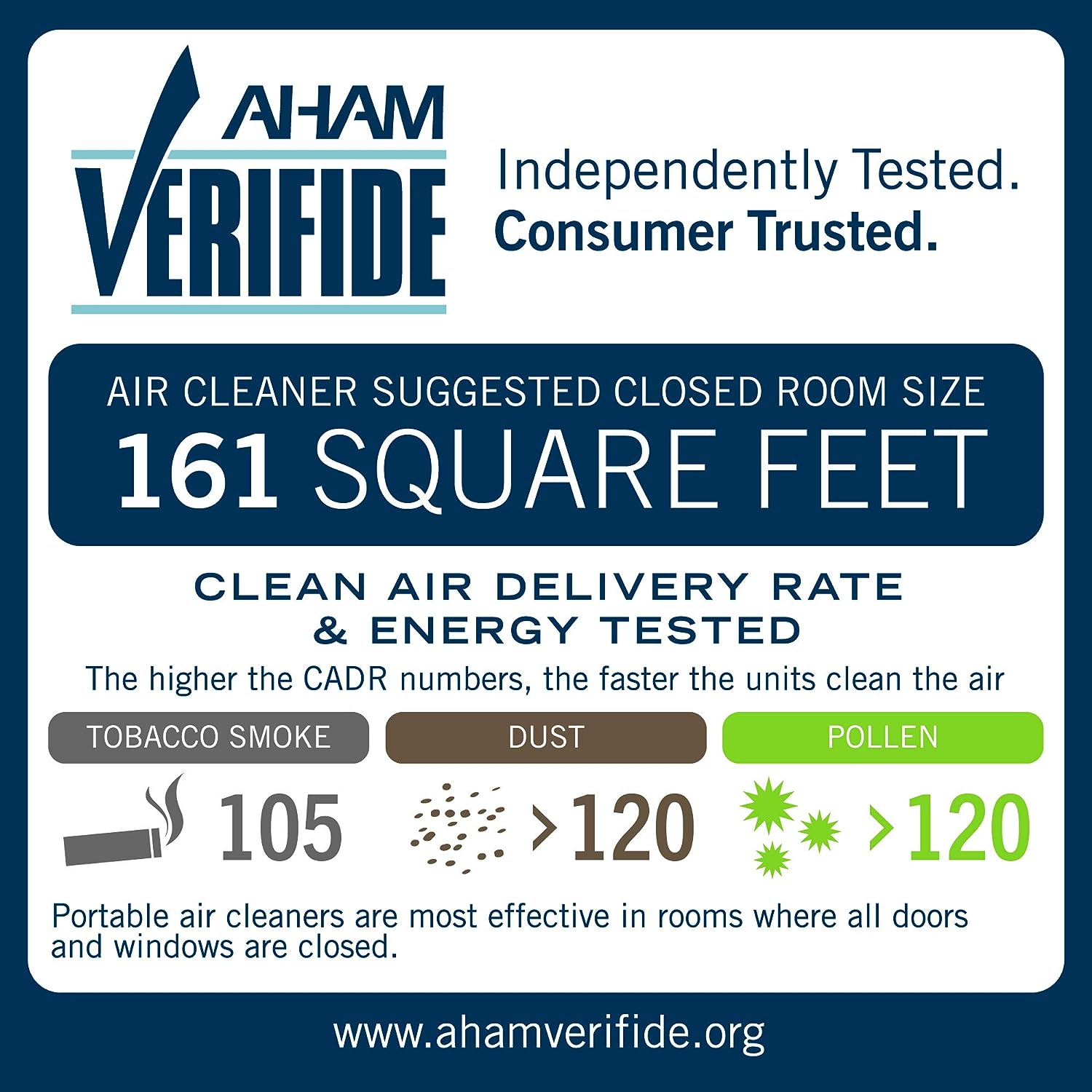 On that note, despite the powerful performance and a fan with three different speed levels, the Blue Pure 411 is still incredibly quiet:Â

Even at the highest setting, the noise levels donâ€™t go over 46 dB â€“ and at the lowest fan speed, itâ€™s pretty much dead-silent at 17 dB!

Iâ€™d like to wrap this Blue Pure 411 review up and add that, even though it lacks the advanced features of high-end models, I never once found myself missing them:Â

Yes, some sacrifices had to be made in favor of affordability â€“ but the large air intake and unique filtration system, coupled with unmatched ease of use and quiet operation, are more than enough.Â

As far as budget-friendly air purifiers for bedrooms go, it doesnâ€™t get much better than the Blue Pure 411!

Related Posts  Where To Buy An Air Purifier? - The Ultimate Showdown Of Online And Offline Platforms
"Disclaimer: We are using Amazon affiliate Product Advertising API to fetch products from Amazon.com, include: price, content, image, logo, brand, feature of products, reviews which are trademarks of Amazon.com. So, when you buy through links on our site, we may earn an affiliate commission." Learn more