When frequent cleaning isn’t enough to get rid of allergens, bacteria, and flying dust particles, it’s time you consider getting an air purifier. This device does exactly what its name suggests, and today I’d like to introduce you to a top-notch model – the Honeywell HPA300.

In today’s article, I reviewed this product in detail to show you what it’s all about and what good it could bring you. This one might be just the right air purifier for you, so read my Honeywell HPA300 review to find out!

Honeywell HPA300 can circulate the air up to five times per hour in a room of 465 square feet, which is quite remarkable. The CADR and its high numbers mean that it’ll remove dust, smoke, and pollen from the room in no time.

Depending on how quickly you want your air clean, you can choose between four air cleaning levels, with the fourth one being Turbo Clean. The device also features a timer that can be set to either 2, 4, or 8 hours, depending on how long you want it to operate.

The air purifier owes its immaculate cleaning ability to the number of filters that it contains. To be precise, there are three different ones, each trapping a certain kind of particle.

Perhaps the best part of HPA300 is that it offers great value for the price, and the 5-year limited warranty isn’t too shabby either.

After our brief overview of Honeywell’s HPA300, it’s time to dig a bit deeper and see what this product hides beneath the surface.

When it comes to design, it seems that Honeywell likes to keep things simple as the HPA300 looks like many of their previous models. It is bulky with rounded edges and aims to impress no one with its aesthetics. In other words – nothing too fancy, just basic, utilitarian design.

The good side of such a design (especially the rounded edges) is the decreased hazard for those who have kids or clumsy adults running around. 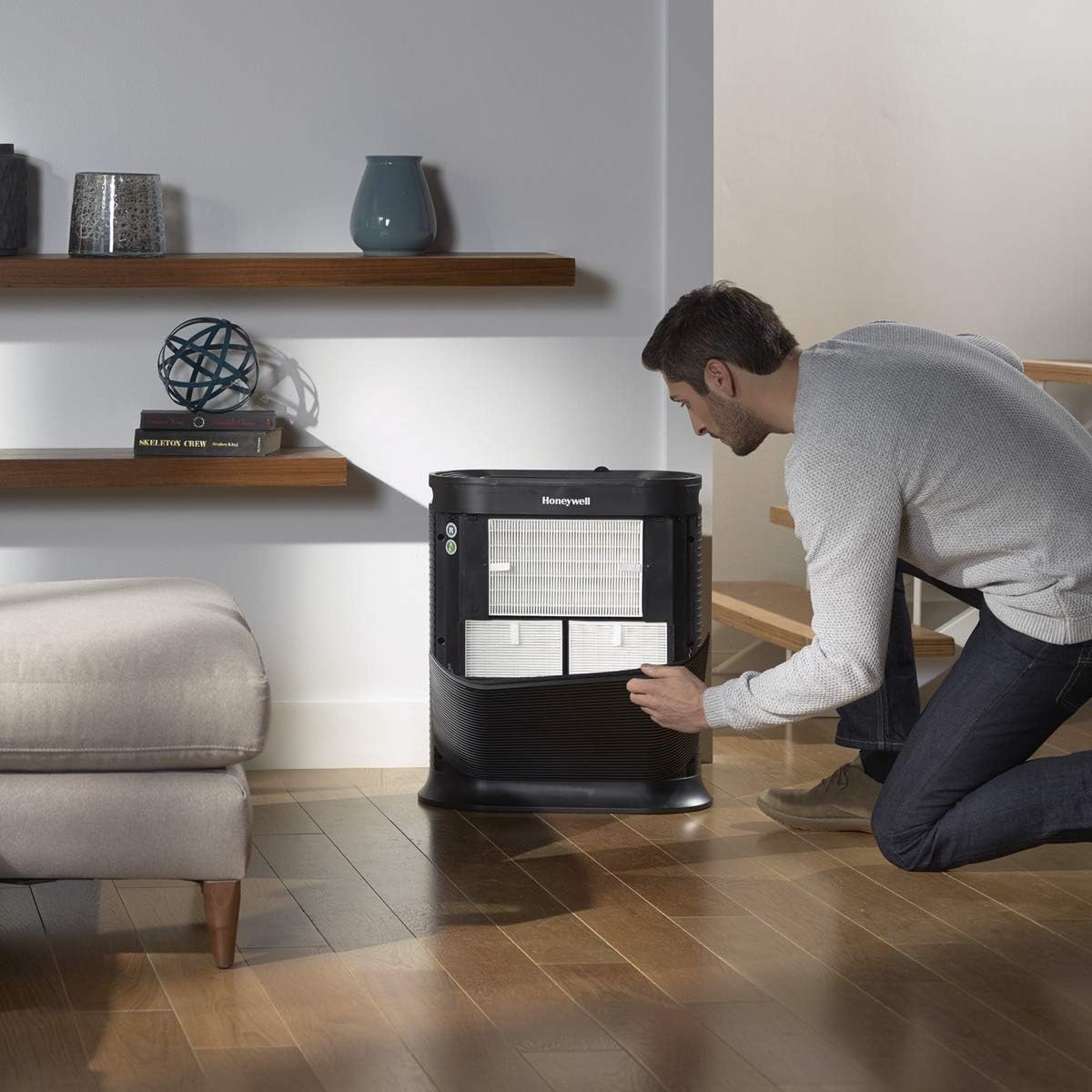 The device feels quite sturdy, and its weight reinforces this feeling. It weighs 21 pounds, so it might be challenging for one person to get it out of the box. As a matter of fact, we advise you to get two pairs of hands for the job.

There’s no special setup required once you unbox it, so you can simply plug it in and turn it on. The side of the device can be opened to unveil the filters, but you won’t need to worry about this until it’s time to replace them. 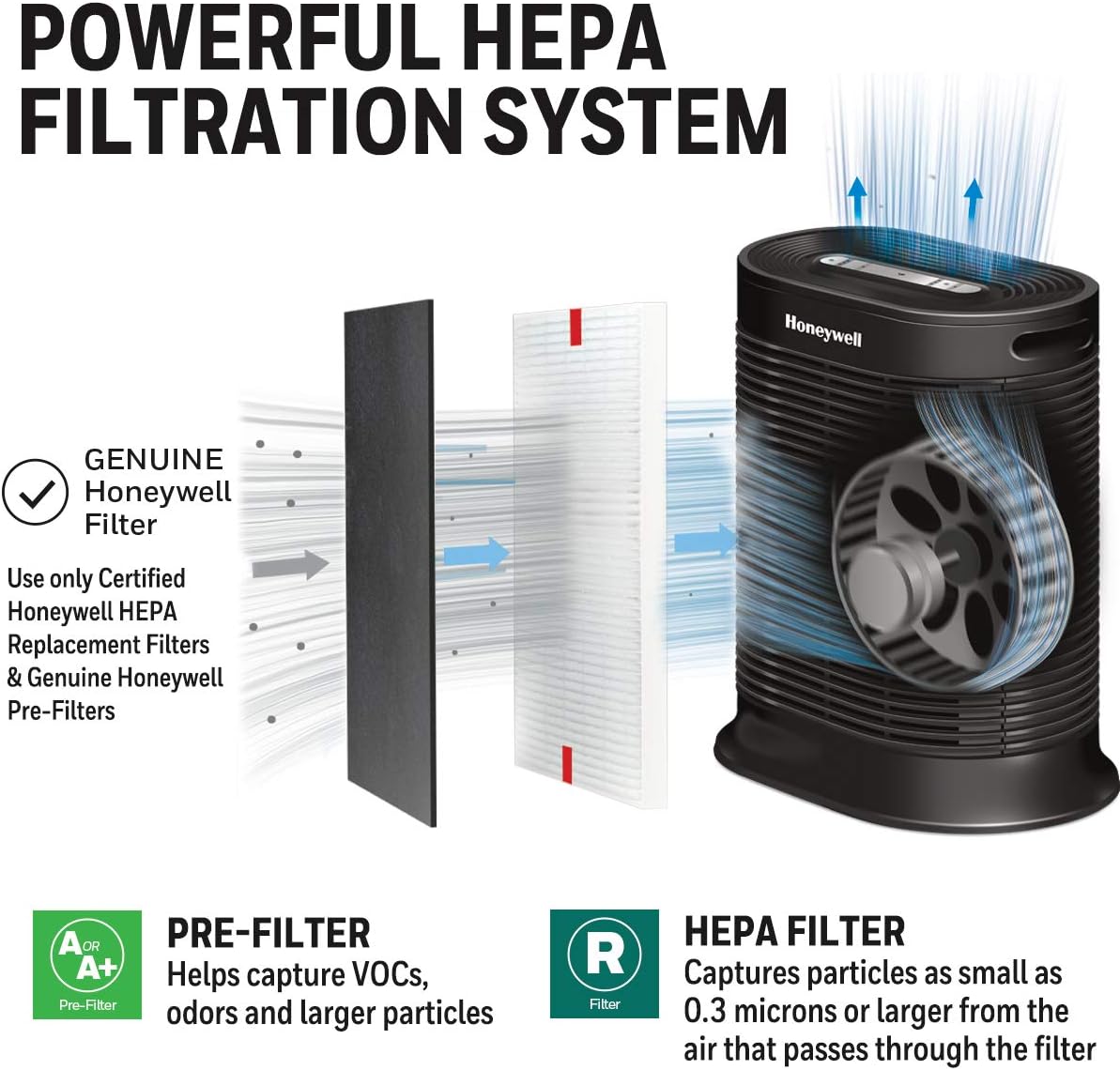 The very first thing we noticed when turning it on is the noise. This thing is freaking loud and it gets louder as you increase the cleaning levels. However, if you have it running on low, the sound is manageable and you’ll quickly get used to it.

When it comes to doing what it’s supposed to do – filtering air – HPA300 is without errors. It’s two-tier filter system first gets rid of nasty odors and then traps 99.7% of unwanted particles (larger than 3 microns).

So, what exactly does this mean for your health?

It means that you’ll be breathing in less tobacco smoke, viruses, and bacteria, as they’ll get swept out of the air in a matter of minutes. It really does seem to be able to circulate air five times as you can feel the freshness in the room not long after you turn it on.

The controls are located on top, they’re easy to access and are lit with blue LED light, which can be dimmed in case it’s too bright for you. 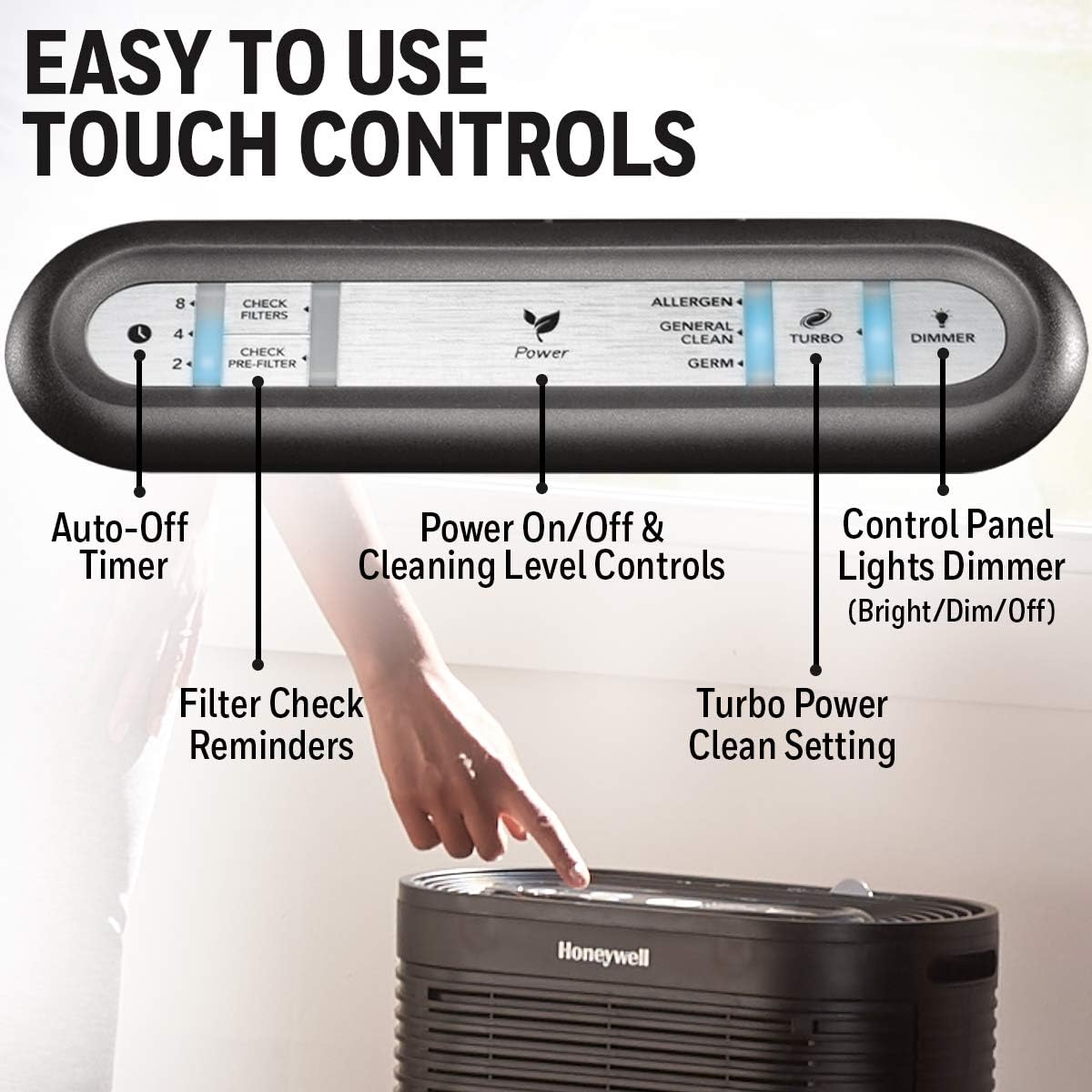 The four cleaning levels include “general” for everyday use, “germ” for the flu/cold season, “allergen” for dust/pollen allergies, and “turbo” for extra speedy filtration. The latter proved to be excellent for quick removal of nasty odors like cigarette smoke, as simply opening the window won’t cut it.

If you want to run the device overnight or while you’re not in, simply set the timer to either 2, 4, or 8 hours and go about your business.

Decision Time: Is Honeywell HPA300 the Best Air Purifier for You?

In case you need an air purifier for a large space and noise or appearance aren’t your concerns, then do consider purchasing Honeywell HPA300. It is one of the most potent models on the market and it’ll trap all those stubborn particles from the air with great effectiveness.

This product is a practical solution for dealing with allergens, unpleasant odors, and even viruses, as it’ll keep them out of your breathing space.

Related Posts  What Does An Air Purifier Do? – Here Is The Best Answer For You