LEVOIT is a company with many innovations in the market. They offer many great air purifiers, and in this article, we will review the LEVOIT Core 300.

The Vista 200 has got many reputations with its smooth, quiet and efficient features. And now came the Core 300 with immediate upgrades from the predecessor.

LEVOIT Core 300 is a simple air purifier with a fantastic design. Let’s see how powerful this Core 300 model is and how good it performs in different situations.

This device is beautifully designed in a white color and gray detailing. The touch panel is black and stylish. Airflow is strong thanks to the 360-degree air intake. Plastic is BPA free. Because of the remarkable style, the device looks fantastic and proves that it is a worthy 2020 iF Design Award holder.

LEVOIT Core 300 comes with Original Filter, whose primary purpose is to remove allergies, dust, and minor odors. We have used the original filter in our tests, but this device can use other filters as well. You can buy a pet allergy filter, toxin absorber filter, and mold bacteria filter.

The original filter uses a three-stage filtration system, which is built from a pre-filter, true HEPA filter, and activated carbon. Pre-filter removes large particles of dust, fibers, hair, and pet fur. With a clean pre-filter, you can prolong the life of the primary filter. 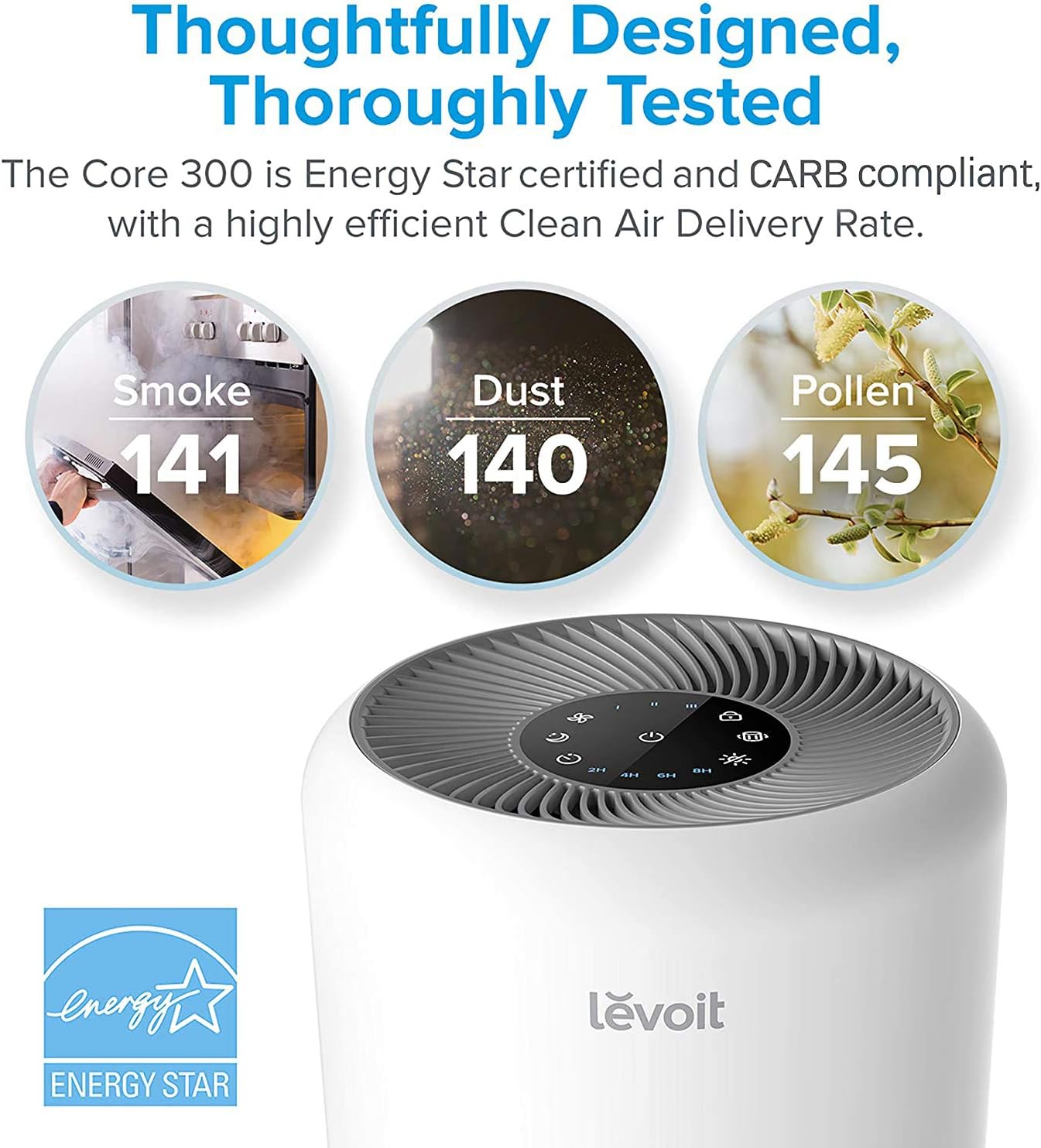 The true HEPA filter is responsible for removing 99,97% of airborne particles down to 0.3 microns. The activated carbon filter is the last line of defense and is used to remove bad odors.

The filter needs to be replaced every 6 to 8 months. However, you can remove the filter sooner if you notice low airflow, unusual lousy smell, or other air quality issues.

For filter longevity, it is recommended to clean pre-filter regularly. Also, before filter replacement, it is required to clean the air purifier and remove all accumulated dust.

Core 300 uses a unique advanced engine with additional functions. On night mode, it is incredibly silent. All thanks go to QuietKEAP Technology, which reduces noise as well.

At first speed, the engine makes only 46.4 dBa. On second speed, 52.9 dBa while on the highest (third speed), it will make 64.9 dBa. However, when night mode is on the device will only make 40.7dBa. These results may vary from official results because our measuring tool includes A-weighted decibels in calculations. 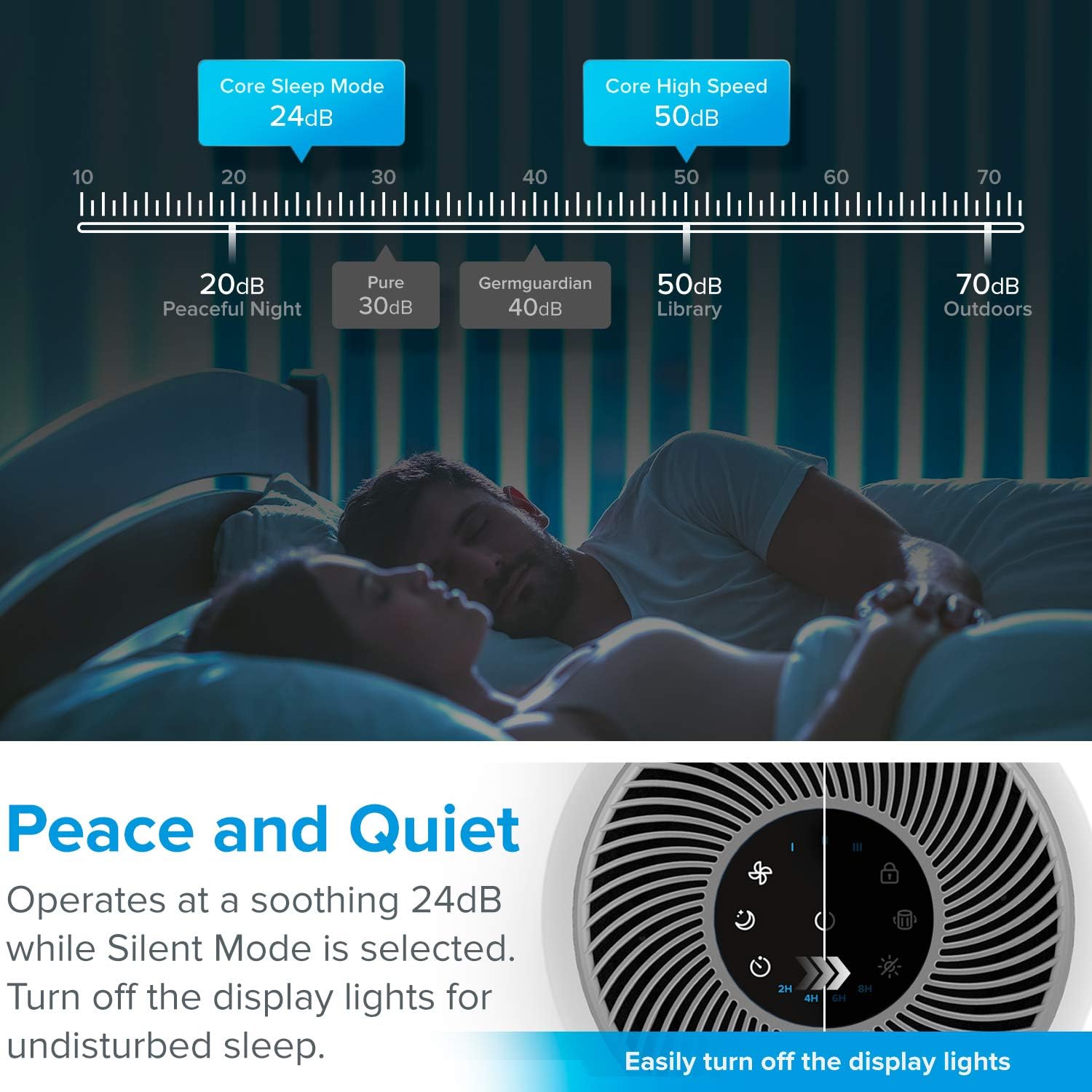 LEVOIT Core 300 uses a 45W engine. It doesn’t use much energy, and the energy bill will not drastically change. In standby mode, this device uses up to 0.8kWh. If you run this air purifier for 24h for a whole month, you will pay around 3.8$ for electricity if the electricity cost is 0.12$ kWh, which is an average power cost in the USA.

Unfortunately, filters need to be replaced every six to eight months, and that is the highest operating cost. To extend filter longevity, follow the advice you find in this video. 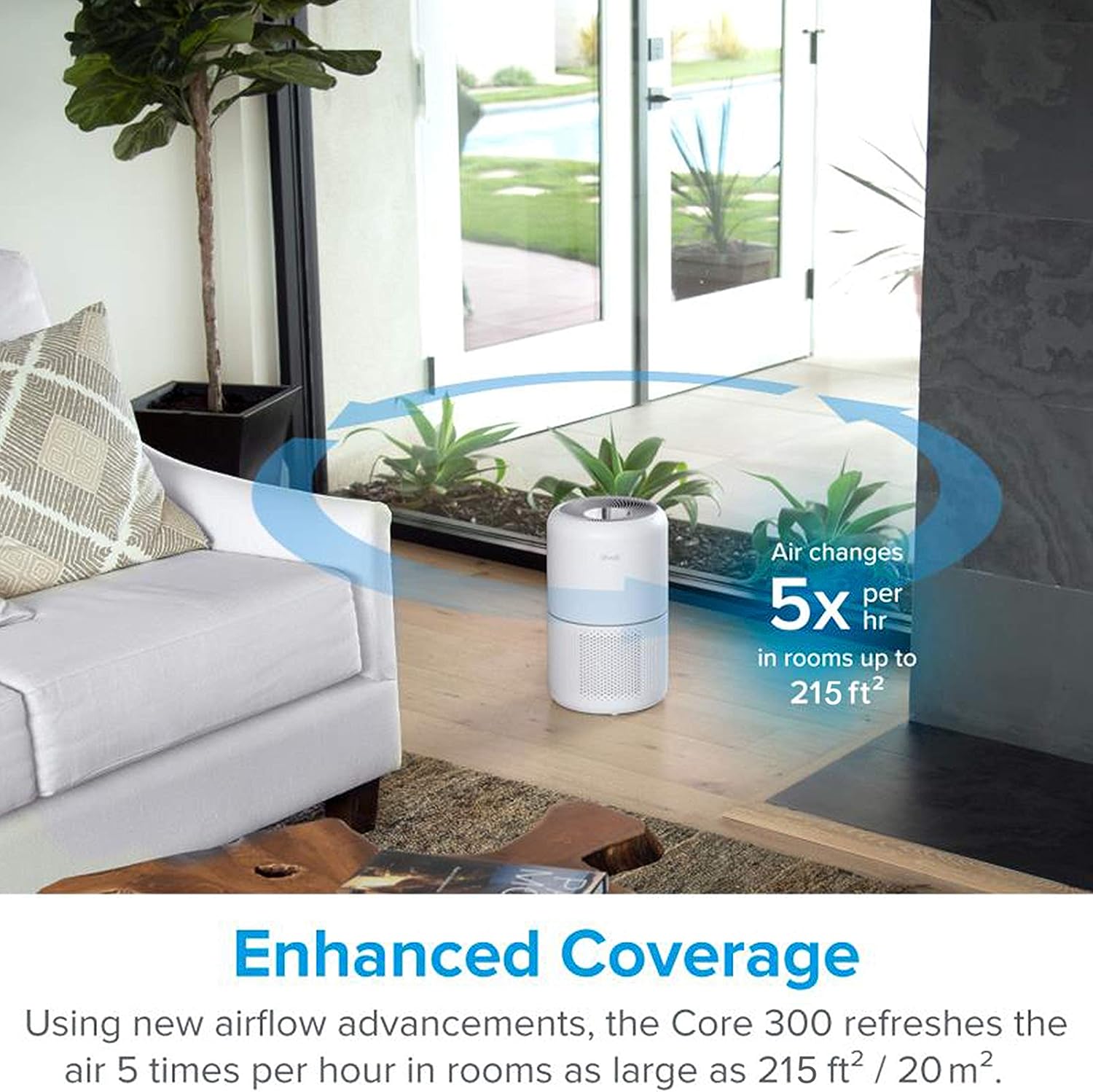 Core 300 is built for 215 square feet room. In such a room, air will be filtered five times in one hour. We have tested this air purifier in different rooms. In-room of 194 square feet air quality was improved quickly as expected.

AQI was lowered from 111 to 8 in just one hour at the highest speed. Air quality was improved by 93%. In an additional 30 minutes, AQI drops to 6. In a room of 320 square feet size, which is larger than the recommended room size the air purifier did an excellent job and dropped AQI from 145 to 12 in only one hour.

This device shows excellent results on these tests, and we think the best reason for that is an extremely powerful third speed, which creates huge airflow. The clean air delivery rate CADR, is a numerical representation of how effectively air purifier filters out known allergens from dust and pollen to pet dander and cigarette smoke.

In general, the higher the CADR, the better the air purifier. The Core 300 is certified for 215 square feet room, and in such a room has CADR for smoke 141, dust 140, and pollen 145. It is also energy star certified, which means it will not burn money. 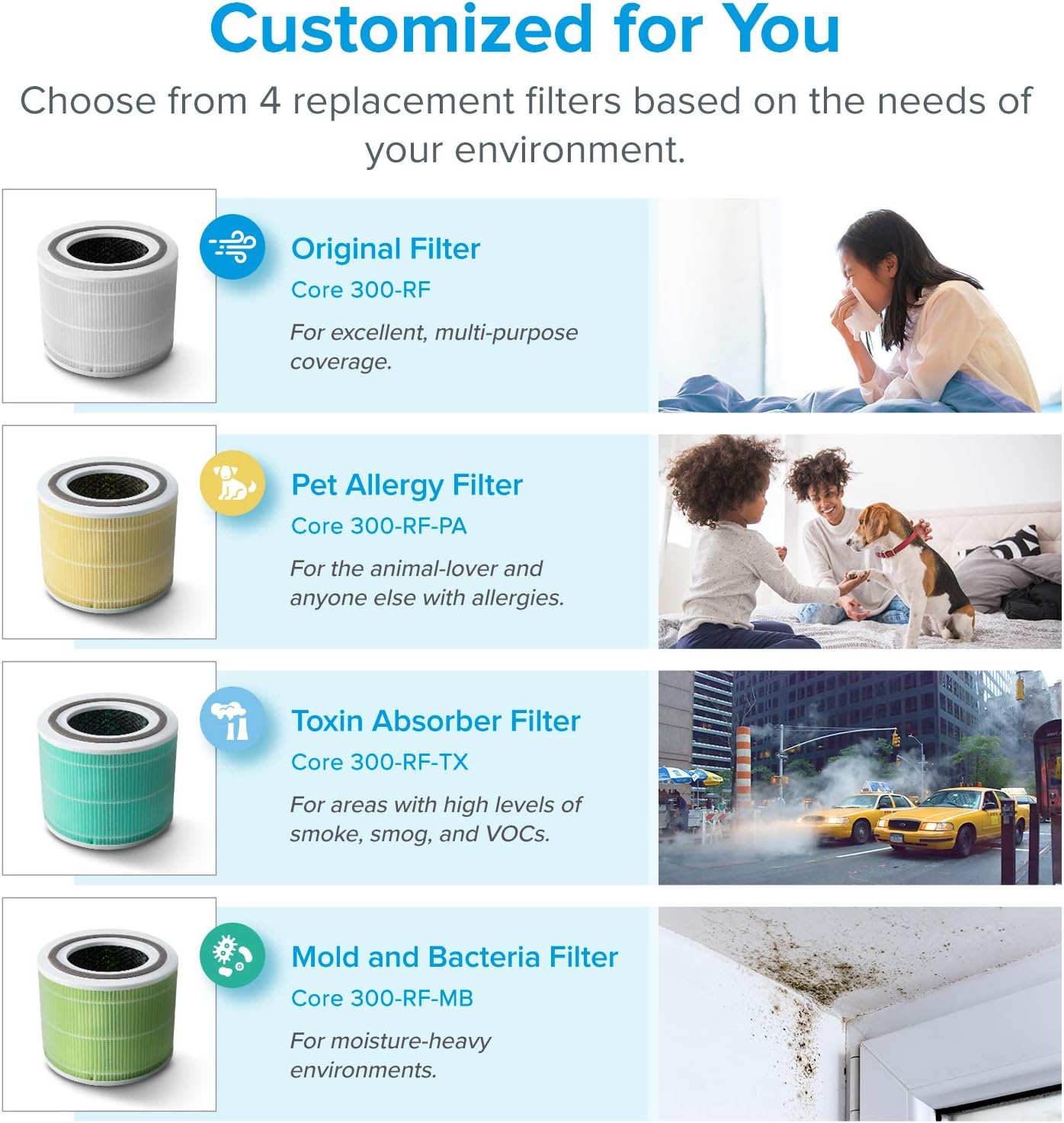 LEVOIT Core 300 is a popular air purifier, especially when people find out that this air purifier is performing exceptionally well even in a larger room than the recommended one.

Design and performance are great, but easy and affordable maintenance, as well as four additional filters, make this air purifier a best buy. If you want a small but powerful air purifier that can clean air in a 215 square feet room, then we believe the LEVOIT Core 300 is the right item for your need.